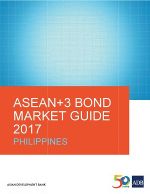 ASEAN+3 Bond Market Guide is a comprehensive explanation of the region''s bond markets. It provides information such as the history, legal and regulatory framework, specific characteristics of the market, trading and transaction (including settlement systems), and other relevant information. The Bond Market Guide 2017 for the Philippines is an outcome of the support and contributions of ASEAN+3 Bond Market Forum members and experts, particularly from the Philippines.

Implementation Guidelines for the Philippines
February 2020 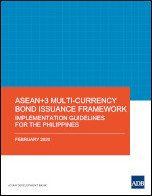 Implementation Guidelines for the Philippines
August 2015 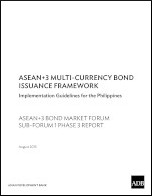 The yields of local currency (LCY) government securities in the Philippines fell across the board between 28 February and 15 May. Yields of bonds with maturities from 1 year to 10 years declined the most while smaller yield declines were observed at the shorter-end and longer-end of the curve. Developments that influenced the downward movement of the yield curve include: the series of interest rate cuts by the Bangko Sentral ng Pilipinas (BSP); investors resorting to safe-haven assets due to the uncertainty on the economic impact of the coronavirus disease (COVID-19) pandemic; weaker inflationary pressure; and the dovish stance of the United States Federal Reserve and other major central banks abroad.

The Philippine LCY bond market reboundedly strongly by 6.9% quarter-on-quarter (q-o-q) in the first quarter of 2020 from a decline in the fouth quarter of 2019, registering total bonds outstanding of PHP7,106 billion (USD140.2 billion) at the end of March. The expansion was supported by both the government and corporate segments which posted stronger growth rates of 7.5% q-o-q and 5.0% q-o-q in the first quarter of 2020, respectively, compared to the preceding quarter.

On 10 April, the BSP announced measures to support domestic liquidity to ensure stability and the proper functioning of the financial market which include (i) purchases of government securities in the secondary market, (ii) a reduction of overnight reverse repurchase volumes to encourage counterparties to lend in the interbank market or to rechannel their funds into other assets such as government securities or loans, and (iii) a repurchase agreement with the government where the BSP shall purchase government securities worth up to PHP300 billion from the Bureau of the Treasury.