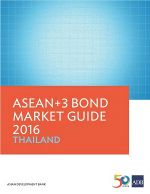 ASEAN+3 Bond Market Guide is a comprehensive explanation of the region's bond markets. It provides various information such as the history, legal and regulatory framework, speciic characteristics of the market, trading and transaction including settlement systems, and other relevant information. Bond Market Guide 2016 for Thailand is an outcome of the strong support and kind contributions of ASEAN+3 Bond Market Forum members and experts, particularly from Thailand. The report should be recognized as a collective good to support bond market development among ASEAN+3 members. View Report 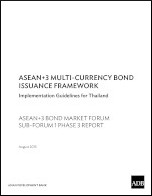 The ASEAN+3 Multi-Currency Bond Issuance Framework (AMBIF) Implementation Guidelines for Thailand are provided to review the AMBIF Elements and detail the corresponding featur​es of Thailand market in relation to each element.

Movements in Thailand's local currency (LCY) government bond yield curve were mixed between 31 August and 30 October. Bonds with maturities of 2 years or below gained 3 basis points (bps) on average, while the 3-year tenor held steady, and the 4-year tenor jumped 10 bps. Meanwhile, yields fell an average of 6 bps for bonds with maturities of 5 years or longer. The spread between the 2-year and 10-year tenors narrowed from 89 bps to 78 bps during the review period. Thailand's benchmark interest rate remained at a record low as the Monetary Policy Committee of the Bank of Thailand (BOT) decided to leave it unchanged at 0.5% in September. Since the beginning of the year, the BOT has reduced the benchmark rate by a total of 75 bps in response to the COVID-19.

Thailand's LCY bonds outstanding amounted to THB14,018.4 billion (USD443.7 billion) at the end of September on growth of 4.2% quarter-on-quarter and 8.3% year-on-year. Growth in the third quarter of 2020 accelerated from 2.1% quarter-on-quarter and 3.2% year-on-year in the second quarter, driven primarily by strong growth in the government bond segment as the government continued to issue debt to finance relief measures to boost the economy amid the COVID-19 pandemic. Government bonds dominate Thailand's LCY bond market, accounting for a 73.2% share at the end of September.